Modality operates to “construe the region of uncertainty that lies between ‘yes’ and ‘no'” (H & M, p.147). In order to treat modality somewhat more systematically than is usually the case in EFL treatments, we need to go back to the nature of dialogue and the speech function of the clause. In SFL, a clause is either a proposition, an ‘information type’, or a proposal, a ‘goods-&-services type’.

For propositions, the space between yes and no is a choice between two options. The first is a probability of either yes or no (There can’t be many candlestick makers left), while the second is a degree of usuality of both yes and no (It‘ll change right there in front of your eyes). These two can be referred to as modalization.

For goods-&-services, there is a choice between some degree of obligation to perform a command (The roads should pay for themselves, like the railways) or an inclination to perform an offer (Voters won’t pay taxes anymore). These two we can refer to as modulation.

Taking the two modality types of modalization and modulation together, we can now see the system more clearly: 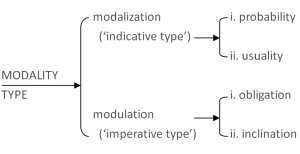